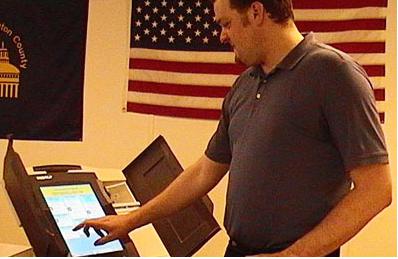 Those who want to maintain the illusion the recent presidential election was completely legitimate claim there’s no proof the Russians hacked our voting machines. But it is far too soon to state that as fact; and in a sense, it’s beside the point. It wasn’t necessary to hack the machines, when it was so much easier and cheaper to hack the machine operators.

Clearly, the machine operators – the voters – were hacked by leaked emails, countless fake news stories, and social media posts and comments harmful to only one of the major party candidates . And just as clearly, the hacking was done by Russian operatives. Sadly, it’s becoming more and more likely the Trump campaign colluded with the Russians.

The machine operators – the voters – were also hacked by the Trump campaign’s promulgation and promotion of vicious lies. Some will say this was just politics as usual, but this was one of the dirtiest campaigns in American history.

The machine operators – the voters – were also hacked by FBI Director James Comey, who twice publicly commented on an ongoing investigation involving Hillary Clinton’s emails.  That broke with a longstanding FBI precedent, whereby ongoing investigations were not confirmed or denied.

To make matters worse, Comey did not reveal that the Trump campaign was also being investigated as to possible collusion between the campaign and Russian operatives.  That was potentially a much worse charge, and Comey’s double standard cast considerable doubt on his own fitness for office.

The machine operators – the voters – were also hacked by gerrymandering and voter suppression, including in North Carolina, where a court ruled the excision of minority voters was done with almost surgical precision.  If you’re prevented from voting, then surely your vote was hacked.

Even now, some in positions of power – not to mention a large percentage of the public – are in denial about all this. But to deny all this is to deny the obvious. It is to say countless leaks and fake news articles did not effect the choice of voters. It is to say advertising and propaganda have no effect. In short, it is to deny the power of suggestion. Only a practiced liar would make such fraudulent denials.

Speaking of practiced liars and fraud, the putative president fraudulently claims he actually won the popular vote because millions voted illegally. There’s only two possible conclusions to draw from that: Either he’s lying through his teeth or he’s non compis mentis, which is a high-toned way of saying he’s nuts.

Time will tell whether this president is truly crazy, but there’s little doubt he’s a pathological liar.  And history will judge his presidency the greatest fraud ever perpetrated on the American people.

Like Loading...
This entry was posted in Politics and tagged Comey, voter fraud, voter supression. Bookmark the permalink.

3 Responses to The Real Fraud